On Saturday November 16th, 2019, my parents decided to come with me to not just one, but two political events in one day to see my hero Bernie Sanders. This was a very special opportunity for me; not many fans get to meet somebody famous that they look up to. From my perspective, Bernie is the most well-known, principled and boldest populist leader alive. He was inspired by previous left-wing leaders throughout American history like President FDR and political activist MLK when they gave hope to the multitude for a better standard of living during their time. In this experience, home to me is the comfort of being with like-minded people who share the same ideology as I do.

Although my mum and father aren’t as politically active nor well-informed as I am, they want to support me to do great things in the future because they know I’m on the right path towards achieving my dreams as an aspiring politician and public intellectual. In the morning, we got ready for an hour-long drive to the first event. My parents and I dressed business formal. I wore a dark blue suit and white dress shirt to match the Democratic Party’s theme colours. I told Mum and Father to wear business formal because the second event is where we would have a chance to meet many political figures, “the celebrities” as I called them since they are notable people in politics. The three of us travelled to East LA to attend Bernie’s campaign rally during the day, then drove to Long Beach where the CA Democratic Party Endorsing Convention was being held. I was really excited for that day.

The campaign rally was hosted at Woodrow Wilson Senior High School. There were hundreds of supporters who gathered to see the leader we all have been waiting for. I’m aware of how the people in the progressive base think, act and speak because I know which alternative media channels to watch on YouTube for news and politics. When I saw these people in person at the rally, I felt in unison because we are all fighting for the same agenda and everyone within the progressive base agrees that Bernie is the right person that the country needs as the next president of the United States. There was live music and a few guest speakers before Bernie and his wife Jane both went on stage. They outlaid the problems of the status quo and stated the campaign’s policy solutions for the country.

Later that day, we went to the Long Beach Convention & Entertainment Center where Bernie and seven other Democratic candidates attended for the presidential forum. This event was hosted by the CA Democratic Party and broadcasted by Univisión.

Outside of the building, there were various supporters for Tulsi Gabbard, Joe Biden, Elizabeth Warren, Andrew Yang and, of course, Bernie Sanders.

There was even a cardboard cut-out of Biden.

However, the other seven presidential candidates besides Bernie that accepted to convene at the state convention were Andrew Yang, Cory Booker, Kamala Harris, Julián Castro, Tom Steyer, Amy Klobuchar and Pete Buttigieg. Tickets were sold out already, so my parents and I watched from the free section of the presidential forum. We were in a dark, semi-large ballroom sitting in the second row with other viewers who didn’t purchase their session ticket. The audience was in the thousands in the arena chamber, which also included local Democratic politicians like Nancy Pelosi, Adam Schiff, Maxine Waters and Mike Levin.

One by one, the candidates were interviewed in a quick town hall format by three different Hispanic journalists Jorge Ramos, Ilia Calderón and León Krauze. For each candidate that went, I described their background to my mum so she could have a better understanding of who they are. The questions from the journalists were about what each presidential candidate will do for the Hispanic community if elected.

Kamala Harris entered the stage first and she responded to the very recent and devastating school shooting at Saugus High School in Santa Clarita, which took place just north of LA on November 14th; two days before the presidential forum. Julián Castro’s topic was on the Trump administration’s devastating policies.

Pete Buttigieg stated his position on the healthcare issue.

When Andrew Yang talked about how the next generations have their eyes glued to the screen of their devices, so to speak, a disgruntled woman behind us yelled, “Why would you give your kid an iPad!” After Yang gave his thoughts on lowering the voting age to sixteen, the same person criticised, “Lower the voting age to sixteen? That’s crazy! That’s too young to vote!” I thought to myself: Oh my days, she’s yelling at the tellie thinking her intolerant opinions matter to everyone else in the room. Next, Tom Steyer addressed what he will do about the climate crisis.

Cory Booker addressed the gun violence issue. And last, but most certainly not least, Bernie Sanders proposed his solution for the immigration issue. Overall, Yang had the second loudest and enthusiastic support within the audience. But Bernie had the standing ovation trumping the previous speakers before him. 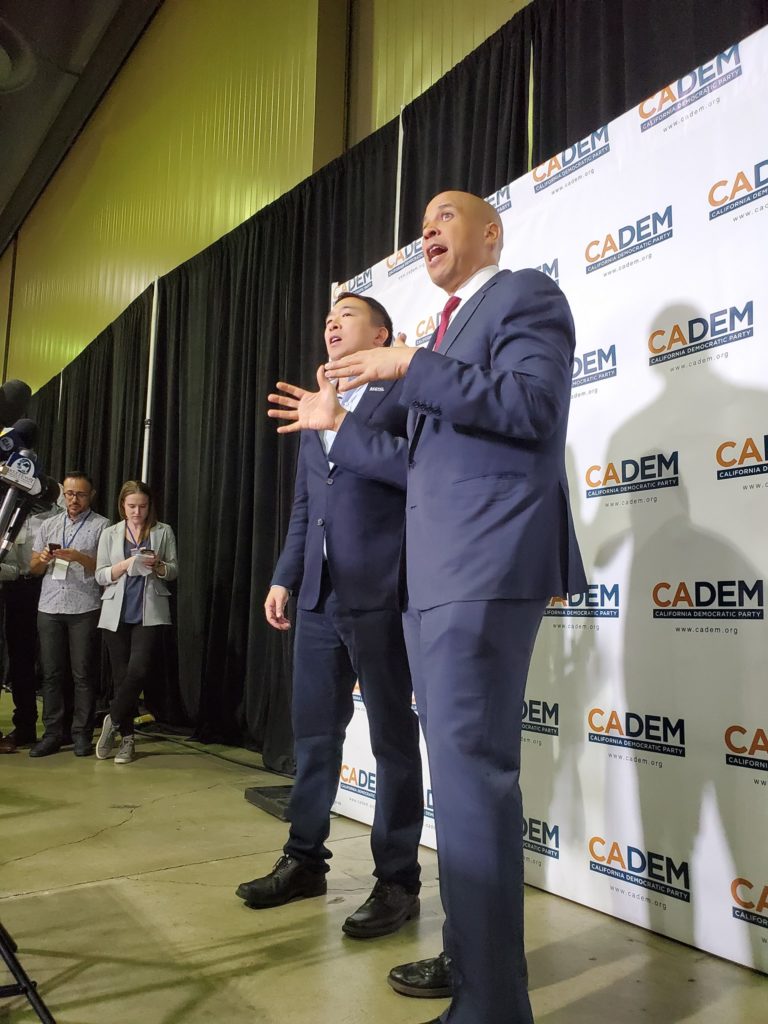 When the presidential forum concluded, it was nighttime. My parents and I walked to dine at the Q Smokehouse, a barbecue house across the convention centre. Funny enough, we repeatedly saw a big vehicle followed by a small one with very bright, LED lit ads in red stating, “Anyone but Trump” with a picture of Donald Trump. They were circling around the complex to make a statement. After we finished, we returned to the event. Then my parents spotted both Bernie and Jane Sanders outside of the Black Caucus meeting. We followed Bernie inside and he delivered a short speech to the audience. Afterwards, I thought I recognised two African American actors, Forest Whitaker and Jaleel White, outside of the meeting room. Then I saw Julián Castro walking towards me so I stood there and nervously said, “Hey Julián.” He confidently replied as he shook my hand, “Hey, thanks for coming.” Castro was heading upstairs to a different caucus meeting whilst I ran towards my parents who didn’t even notice my brief interaction with the presidential candidate. 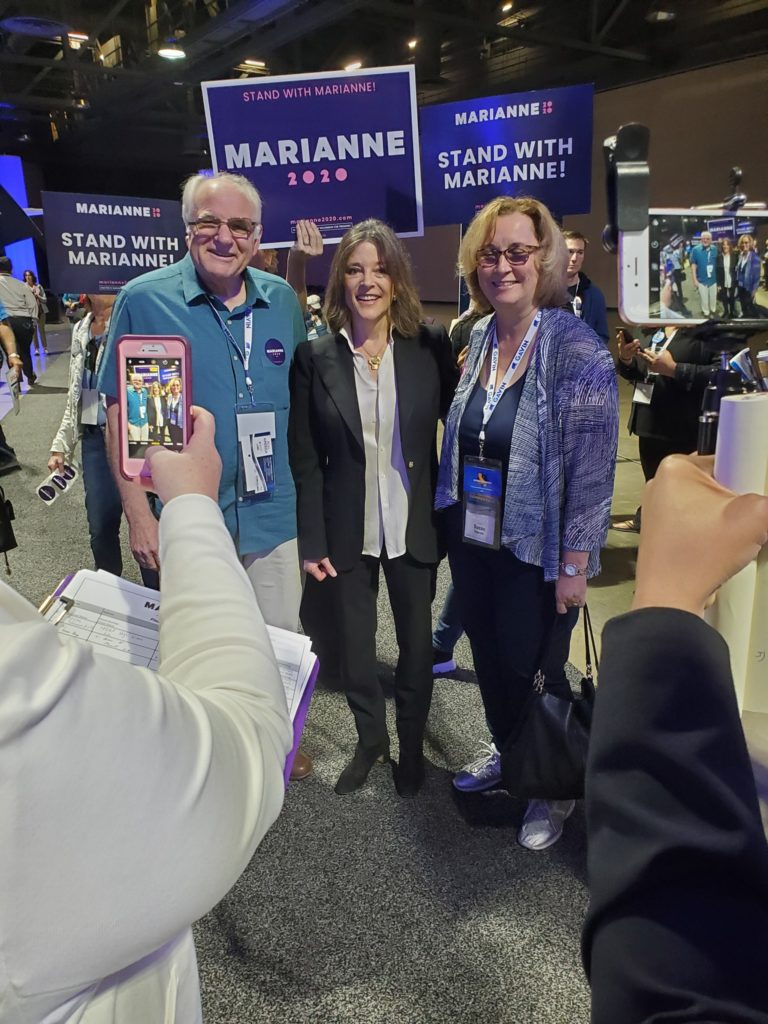 Home is being with my fellow political activists that share the same ideals as I do. When I shared the good news of the entire day to my aunt Susy via text message, she forwarded me a photo of her coworker Jenna Beck with Bernie and Jane Sanders at the event. 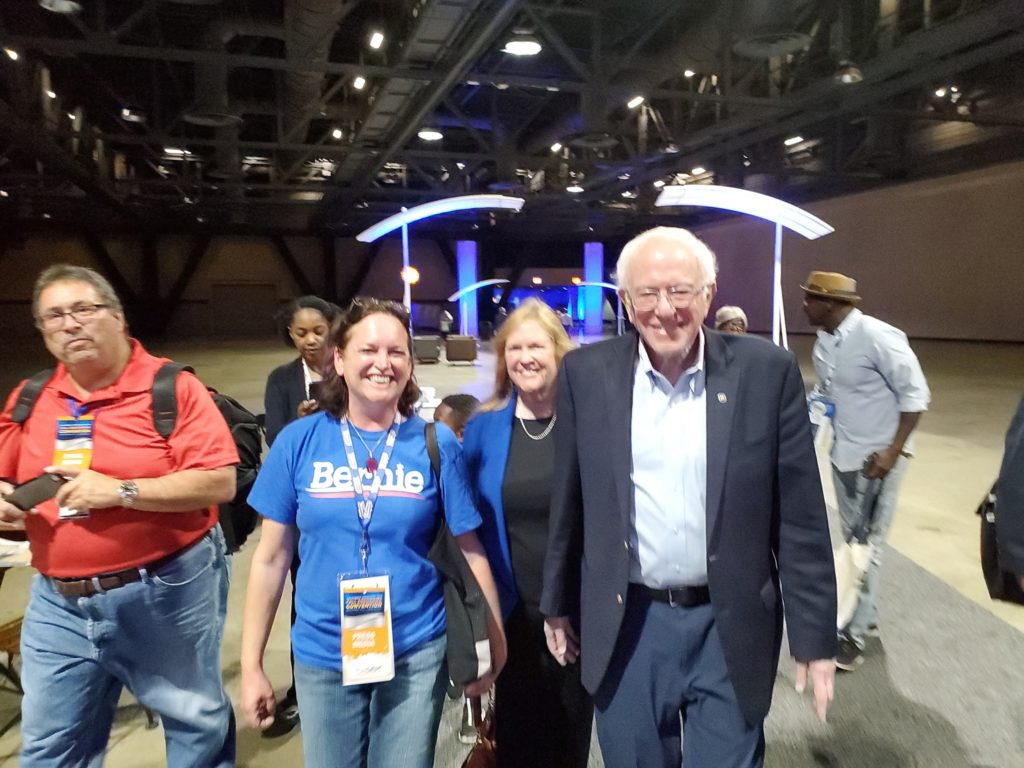 On Thanksgiving Day, Auntie Susy mentioned to me that Beck announced her run for member of the County Central Committee for the 73rd Assembly District of CA. Like me, she was motivated by Bernie to get involved in politics. I felt that I wasn’t the only politically enlightened intellectual and free thinker who diverts from the mainstream.

I now recognise that many ordinary Americans understand that they themselves are the undervalued and exploited victims of a rigged system, which is favourable to the global elite and big businesses. Furthermore, the working class is beginning to realise that socialistic policies are the common sense answers to the world’s current problems, to preserve the nation’s democracy, and to defend the people’s human rights and freedoms against the oligarchs and oligopolists. The progressive movement has been growing larger and more unified. If Bernie is elected as the next president of the United States, he will further push the Overton window so that I could become the next people’s champion in a few years time. Good leaders make more followers. Great leaders create more leaders.

Editor’s Note: Paolo is a college student from South Orange County, California. This essay was originally written as a submission for a classroom assignment. We are proud to provide a public forum to share Paolo’s experience and to encourage more young people to rise up and get involved.