As someone who is relatively new to politics, I’ve spent a lot of time over the last two and a half years observing the people around me. Generally, when I meet new people I give them the benefit of the doubt that they are good at heart and well-intended. This has been my mantra throughout life, however I’m learning that there is so much more involved in political circles.

What is really encouraging is watching legitimate organizations like the Progressive Democrats of America send out an email reaffirming their support for #DemEnter (a common hashtag used to represent entering the Democratic Party). 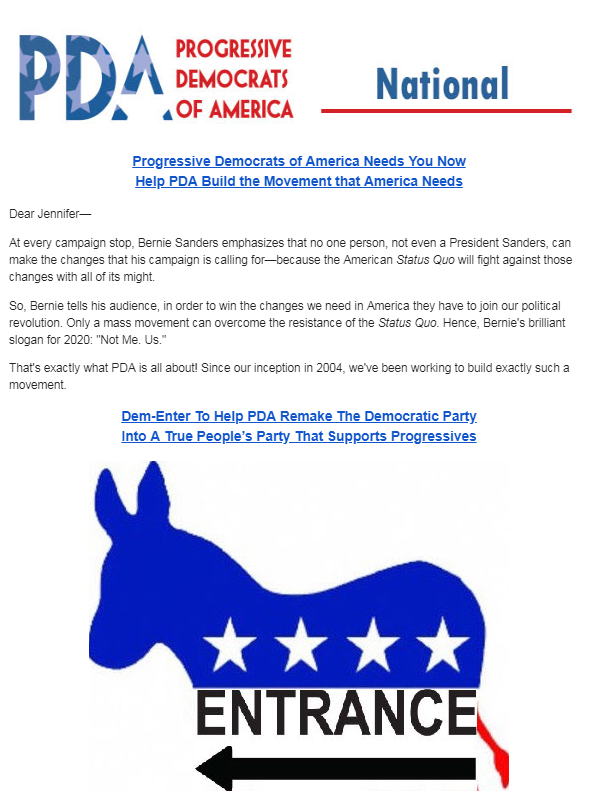 Bernie Sanders is the defacto leader of the Democratic Party right now. His campaign strategy is to get his base and non-voters to enter the Democratic Party and transform the Party from within. We will use the Party mechanisms to advance progressive issues and elect progressive candidates. Our relationship with the Party is at times contentious, and that is because we are agents who are advancing change in an area of resistance.

There has been quite a bit of lobbying by groups like the California Progressive Alliance trying to persuade progressive groups to open up their endorsement processes to candidates outside of the Democratic Party. This is to intentionally weaken DemEnter efforts in the misguided hope that a new third party will emerge. What it would really do is break up the progressive left while the GOP is unified, causing us to lose more seats and lose more ground.

The Movement for the People’s Party started as a #DraftBernie campaign that failed to draft Bernie. He’s not interested in this misguided concept because he knows the only way to get elected is to run as a Democrat. They are the originators of the current bastardized version of Inside / Outside strategy, which is also parroted by Gayle McLaughlin’s California Progressive Alliance. The idea that anyone can change the Party bylaws from outside the Democratic Party is absurd. This group wants you to give up your seat at the table and leave the Party to the elites. It is the absolute reverse strategy from what Bernie Sanders is asking us to do when he say #NotMeUs.

Many of the political relationships I formed early on turned out to be harmful. While I supported and lifted up several people, I didn’t realize at the time how quickly they would show their true colors when my goals to reform the Party did not align with their goals to exit the Party. Their actions were so coordinated and strange to me that I watched, learned, and looked for patterns. What I discovered was a loose network of people who try to narrowly define what “progressive” means and use their definition to control the grassroots, restrict entry, limit volunteer participation, impede growth, and defame those who they see as competitors.

In many cases, members of the network spread conservative talking points when it supports a specific narrative that aligns with their goals. I’ve refered to this group recently as a cult. A friend of mine said it’s more like a culture. I think there is a fine line that these folks are treading that sometimes moves from culture to cult. I’ve watched members of this network smear at least six different people over the last two years, including two progressive Democrat Congressional candidates. Smears included:

The network has surrounded other candidates who they feel were mistreated by the Party such as Tim Canova who was running for U.S. House in Florida’s CD-23 against the notorious Debbie Wasserman-Schultz who was forced to resign in shame after Wikileaks exposed favoritism at the DNC. Tim was convinced through his associations with this network to leave the Democratic Party and run as an Independent. They also have surrounded presidential candidate Tulsi Gabbard who recently made a visible misstep in issuing a statement about the arrest of Julian Assange before we have enough information to know if he’s commited any crimes. Tulsi has been making the rounds on the conspiracy theory circuit.

The most surprising thing to me is how many people willingly participate in these schemes. For example, just a few weeks ago a woman whom I’ve only met once for less than 30 seconds and who has never met my fellow editor and project partner, Don Ford, contacted a man who has been mentoring me to tell him not to trust Don or me. She spread a smear campaign where she could not possibly have known the facts as she does not know us at all. It was all straight out of the smear letter that was written to get our Memorandum of Understanding terminated with Our Revolution. This woman is otherwise respected in our political community but stooped to circulate petty gossip to help someone’s meanspirited political agenda. Often I feel that many of the people I meet in politics have the emotional developmental level of high school teenagers.

To understand how it all comes together, I created an org chart. My org chart has names in it, but for the sake of not rattling the bee hive, this is a ten thousand foot overview. The organizations mentioned below have several supporters of the MPP and of the CPA. They are considered aligned with this movement. 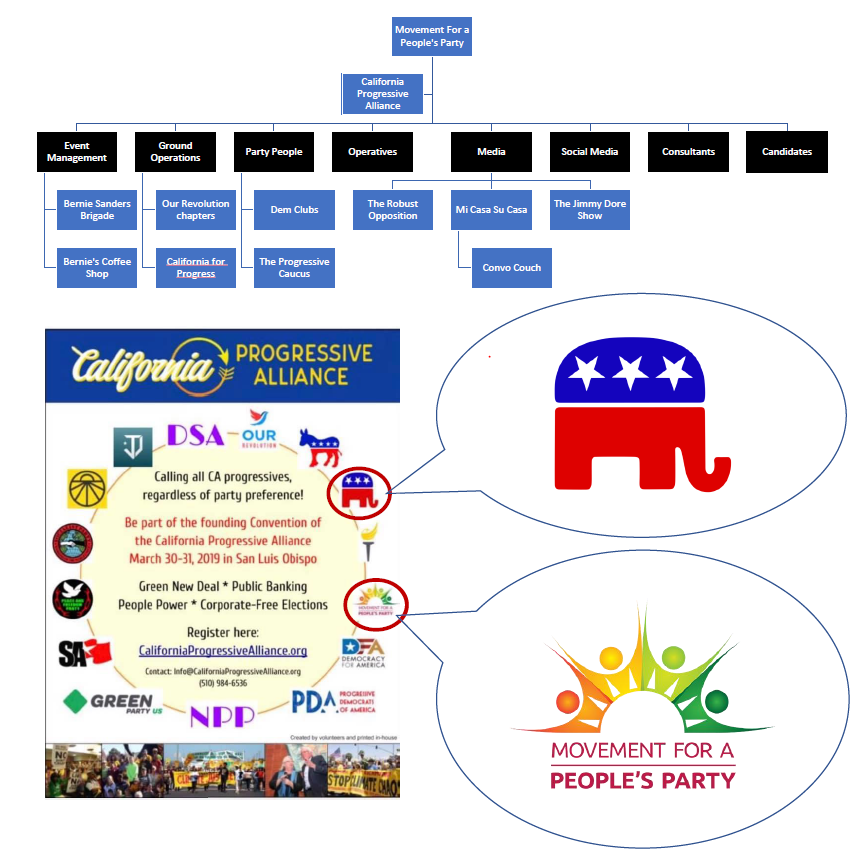 In addition to participating in smear campaigns, the network spreads purposely misleading and false information. For example, they have repeatedly attributed the MPP’s Inside / Outside strategy to Bernie Sanders, though he has never said anything remotely similar and every action he has taken has been to enter and reform the Democratic Party. It is this type of false messaging and misleading information that they use to draw people into their network.

They also reached out to pretty much every progressive group in California by way of their partnership with Gayle McLaughlin and her California Progressive Alliance. Prior to expanding statewide, Gayle formed an alliance organization in the city of Richmond, CA where she was Mayor for a time.

“The way the RPA related to this was that we had to build an independent local alliance, an independent movement in our city. So, even though people may be registered in the Democratic Party the progressive Democrats understood that the two-party system and the Democratic Party leadership was corporate controlled, is corporate controlled today, and that we needed something independent. Some people felt it was important that they kept their Democratic Party membership, they have a view that working within the party makes sense. I was a Green Party member the whole time I was in office until Bernie Sanders ran in 2016 and then I switched to No Party Preference (NPP). In California, you can vote in the Democratic presidential primary if you’re registered as NPP.” – Gayle McLaughlin

So why is it so important for this network to smear people and tear them down?

Because we are trying to enter and reform the Democratic Party, which hurts the goals of those trying to get people to leave the party. This is so important to them that they are willing to risk Bernie Sanders’ presidential bid to do it. They’ve already made it quite clear that they will take down our congressional candidates, our strategists, our organizers, and our volunteers.

Anyway you look at it, this network, culture, strategy, whatever it is, it is working against Bernie Sanders and the progressive movement.

How is this network different from non-partisan groups like Our Revolution and Progressive Democrats of America (PDA)? While these organizations are non-partisan and encourage everyone to participate regardless of political affiliation, their goals are to support progressive politicians. In the case of PDA, specifically to support progressive Democrats. In the case of Our Revolution, specifically to Transform the Party from Within. Neither of these organizations push any material that would encourage members to leave the Party. That is the biggest difference. Focusing on Democratic Reform vs. focusing on sucking people out of the Party.

I write extensively about these topics on Facebook and very often I receive some sort of spin communication in response where they try to recover from and hide the truth. Because I don’t have a position in the Party (they threw several obstacles at my attempts to enter), and because I don’t have an official Our Revolution chapter (they organized a smear campaign to get me dischartered), I have no responsibility to pull my punches. I am free to say what I want, when I want. And no amount of taking me out for drinks and trying to plant a new version of events or a new spin on their strategy will change what I already know about this network. I am not going to help these groups with any positive press or spin. I am not going to approve of or participate in these groups. I don’t have to, it’s not a progressive requirement, and I’m perfectly allowed to be critical and challenge their ideas.

Bernie Sanders had a massive Organizing Kickoff at 4,700+ house parties in more than 30 countries this last Saturday April 27, 2019. He has shown us that he wants all of us to step up and be organizers.

So long as this network keeps trying to get people to leave the Party, keeps bottlenecking organizers, and keeps smearing progressives, I will continue to be critical.

And I will keep organizing.