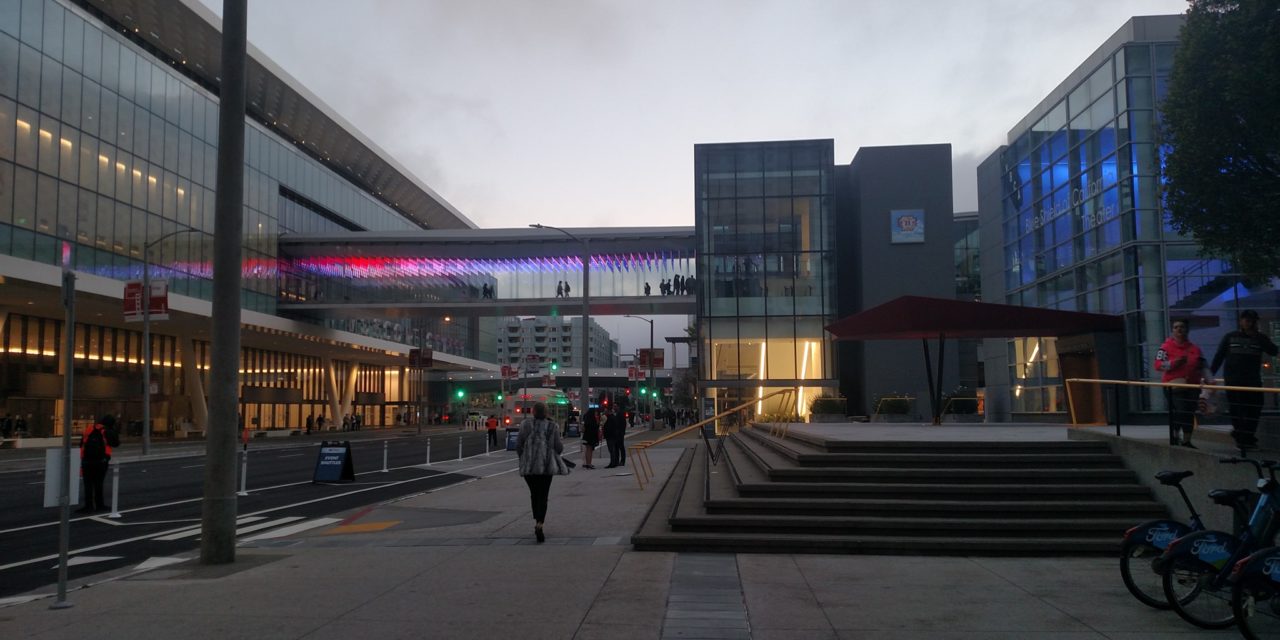 On May 30, 2019, I embarked on a journey to attend the California State Democratic Party (CADEM) Convention in San Francisco, CA. The first day was comprised of several hours of driving to locate an inexpensive hotel just outside of the city, to save a little money on the way. Since I was not a Delegate either through grassroots election or through my County’s Central Committee, my purpose for attending was strictly to learn and gain information that I could report back here.

I anticipated a circus atmosphere, as there was an important Chair race for Delegates to decide after the sudden and shocking resignation of Eric Bauman due to allegations of sexual harassment  and assault. Also, at least 14 presidential candidates had planned to make appearances throughout the weekend, including but not limited to, Bernie Sanders, Elizabeth Warren, Beto O’Rourke, Kamala Harris, Pete Buttigieg, and more. Notably not in attendance was former Vice President Joe Biden, who didn’t expect to receive a warm welcome from the California delegation. I will cover the presidential candidates in a separate article.

The most important point of order for the convention was the election of a new Chair. Full disclosure, I personally volunteered for Daraka Larimore-Hall’s campaign leading up to and during the convention. With that in mind, I’ll focus my comments on the other two leading candidates, Rusty Hicks, President of the Los Angeles County Federation of Labor, AFL-CIO and Kimberly Ellis, Executive Director of Emerge California.

For historical context, it’s important to remember that in the previous election, Eric Bauman won the Chair election over Kimberly Ellis by a slim, but fair, 2% margin. The race was easily just as, if not more, contentious than this last election. Allegations that Ellis was bullied and harassed were circulated on social media. 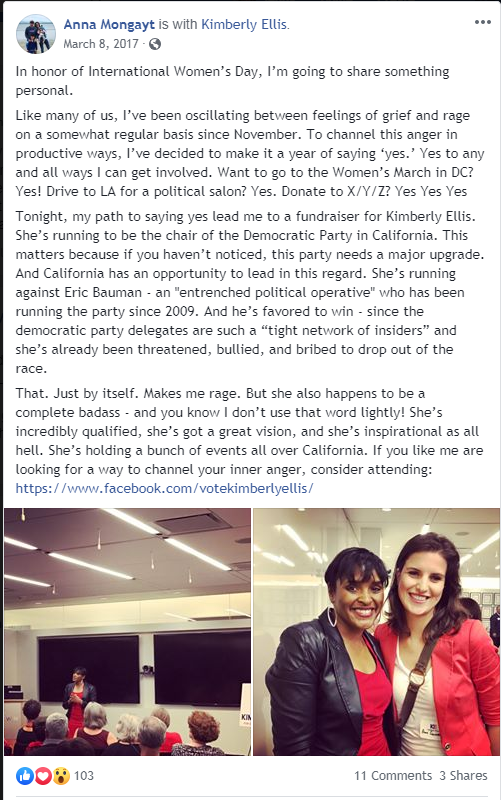 The election results were followed by several weeks of calls by Ellis for an audit. This created a lot of suspicion in the election results as well as attracted conspiracy theorists who were already distrustful of the Party and third party operatives who used these sorts of situations to call on people to leave the Party.

Even though Ellis was a vocal supporter of Hillary Clinton during the 2016 presidential primary, she was able to attract Berniecrat support for her campaign. Many of her supporters in the 2019 Chair race were not actually Democrats, but rather they were third party and no party preference (NPP). Therefore, her support was artificially inflated whereas Hicks’ support was entirely registered Democrats. 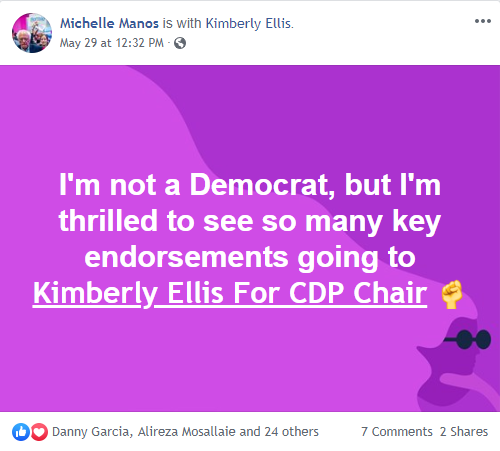 The Progressive Caucus is the largest Caucus in CADEM, which should be an indicator that the Party is moving left. And it is. However, many of the former leadership, which was just replaced by new blood, had a very narrow definition of progressive values and worked hard to exclude those who they felt didn’t meet their standards of a progressive. This exclusivity hurt their performance in the Assembly District Delegate (ADEM) elections that were held in January 2019 over the course of a couple of weekends. As a result, many of the Delegates who were loyal to the previous board lost their seats. Ellis had relied heavily on the support of these Delegates, but apparently didn’t consider how the math had changed. This was a critical blow because the Delegates vote in the Chair race. I’ll get into that more when I talk about Hicks.

Nobody could have anticipated that the Bauman scandal would break shortly after the 2018 November CADEM EBoard meeting in Long Beach, CA. However, this did create an immediate opportunity for Ellis to throw her hat in the ring once more.

About a year ago, I was involved in meetings to organize progressive slates in LA and Orange Counties in which several grassroots leaders attended and shared information. The meetings lasted a couple of months before being hijacked by the network connected to the former Progressive Caucus leadership. We also learned in August 2018 that the Progressive Caucus leadership was meeting with Our Revolution chapter leaders to organize progressive slates.

This was the fatal mistake.

Rather than plan with people who were interested in entering and reforming the party, they chose to work with a network of Our Revolution chapters that were predominately in favor of leaving the party. It was the wrong vehicle. The expertise and enthusiasm was missing. They had no interest in learning how the Party works. New relationships had to be formed at the last minute. Seats were lost.

Ellis’ relied on this same network for support, even gaining the endorsement of two chapters who then applied for the National Our Revolution endorsement. Despite receiving advice from progressive leaders to stay out of the race, Our Revolution did endorse Ellis.

Conversely, Labor made its move, sweeping the ADEM elections and setting up a network of new Delegates who were loyal to their unions. Labor out organized the Progressive Caucus leadership team at every turn.

In Orange County, CA, for example, Hicks had strong support that was only challenged by a marginal portion of its Delegation. Our Central Committee had just elected the Co-President of Unite Here Local 11, Ada Briceno as County Chair, and other newly elected Board Chairs were Labor connected.

Briceno was already becoming visible through her fight against Disney’s poverty wages. She had helped organize a rally in Anaheim featuring Bernie Sanders and Disneyland employees sharing their experiences in a town hall setting. Briceno was leading worker strikes throughout the county and organized a demonstration of civil disobedience. She emerged as our true progressive leader.

The candidates all made the rounds through County Central Committees and Democratic Clubs. Hicks had the advantage with Labor, who once they endorsed him, their Delegates were pretty much bound to vote for him or the union would not cover their convention expenses. This is a common practice. Ellis’ campaign used this to create the perception of bullying and fear among Delegates. It’s possible that union leaders may have been firm or even crossed the line in communicating this to their Delegates. As far as I know, that’s all speculation right now.

This time around, there was again A LOT of mudslinging leading up to the Convention, primarily by supporters who could safely create some degrees of separation from the candidates themselves. Everything from using the Bauman case to cast doubt on Larimore-Hall, to an article about financial troubles and potential mismanagement with Ellis, to allegations of bullying and intimidation from the Hicks’ campaign.

All of the candidates stuck to their messages of Party unity, empowering grassroots, and continuing to hold on to our newly flipped blue seats and gain more seats in the upcoming cycle. The endorsements started rolling in immediately, including, but not limited to, Rep. Harley Rouda, Kevin de Leon, and Ada Briceno all for Hicks.

It wasn’t even close. Hicks won by a landslide 57% of the vote. There were audible gasps in the hall as the network learned of its loss. It was clear that the old guard Progressive Caucus leaders who had been trying to gain control of the Party had lost a lot of ground. The power of the network was shrinking; they were unable to produce more wins for three years in a row. Even with such a clear victory, the network continued to propagate smears.

The 57% celebrated. Even more than the 57%, because many of the Delegates who voted for other candidates were concerned about the people surrounding Ellis as well. I know she has a bright future ahead of her and I hope she does more to work with reputable advisors. The 2019 team seems to have led her astray.

Hicks has already made strides to bring everyone back together. The day after the election, he rented a food truck and offered free breakfast burritos and t-shirts to everyone at the convention. 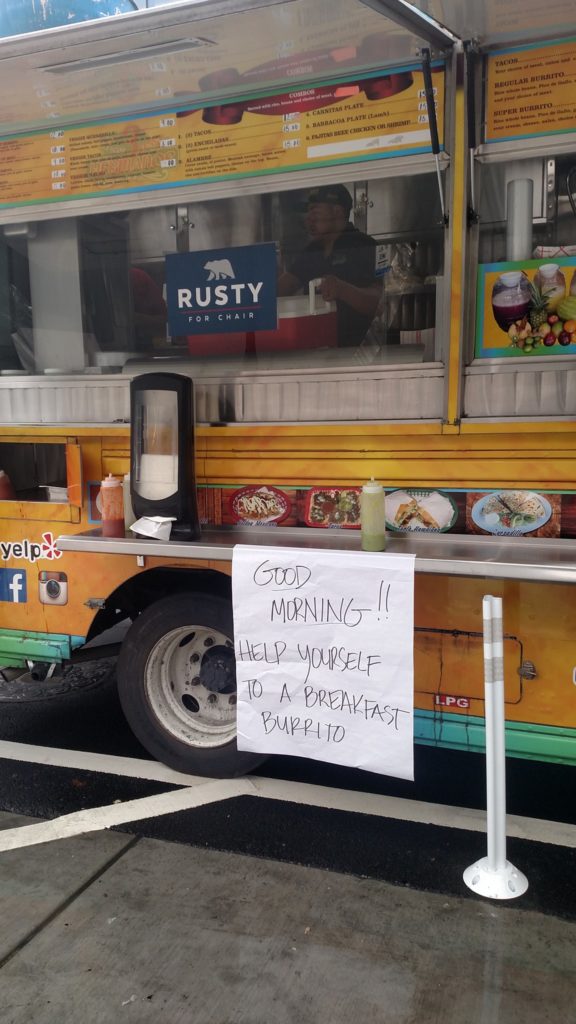 But, the absolute stroke of genius was to empower Ellis to help evaluate the decision-making bodies. So now we truly should have Party unity. No excuses.