Did James Comey Spoil the Election? 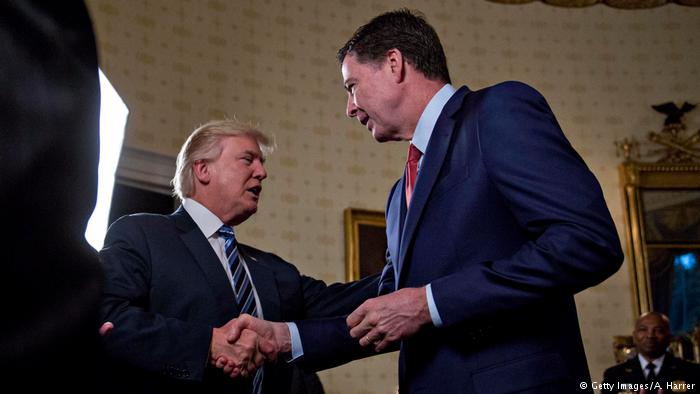 George Stephanopoulis interviewed former FBI Director James Comey on ABC last night on the program: “A Higher Loyalty: The Comey/Stephanopoulos Interview 2018″. The segment was one hour long and breezed past many of the pertinent events for which Comey was directly involved. I spent much of the hour yelling at the TV and deciding whether to change the channel. The program seemed ill-timed given the U.S., U.K., and Israel had just bombed Syria on Friday April 13, 2018, in violation of international law. In the process of those strikes, it is being reported that 200 Russian troops have been killed.

As a proposal management professional, I know the value of keeping a content database. Having access to your previously written materials saves time, improves accuracy, and in this case, preserves history as it truly played out. And so to analyze Comey’s interview, I will revisit a previous article I wrote under a pen name for Our Voice titled “Did Russia Interfere In The U.S. Election?”.

This is generally where I get the most push back, because people don’t want to talk about what really happened during the election. They don’t want to remember all the headlines, perceptions, and political baggage from years past that influenced the vote.

The FBI’s investigation into Hillary Clinton

During the 2016 election, Hillary Clinton was being investigated by the FBI for mishandling top secret / special access information by way of an illegal private server network configuration, as well as obstruction of justice. Presumably, to install and implement an IT hardware and workflow configuration such as this would have required special permissions from inside the State department, as the classification levels for the e-mails would have been restricted to predesignated and approved State e-mail accounts.

The investigation was a dark cloud hovering over Hillary’s campaign, even though her pundits positioned it as Benghazi part 2. However, this is akin to comparing the supposedly impartial FBI to the partisan GOP majority in Congress. Shortly after Hillary won the nomination to run for the Democratic Party, Bill Clinton had a “chance” meeting with Attorney General Loretta Lynch on the tarmac of the Phoenix Sky Harbor International Airport. The Fox News article I cited for the original article has been inexplicably removed from the website. Approximately two weeks later, Comey announced that he did not recommend the case go to prosecution, despite not completing the witness interviews.

Through the FBI investigation, key witnesses were granted immunity, but plead the 5th when asked to testify to Congress’ House Oversight Committee and the Committee on Science, Space, and Technology. The request to alter e-mails came from Cheryl Mills on July 23, 2014, who was subsequently granted partial immunity.

Clinton’s IT specialist Paul Combetta (aka “StoneTear”), who publicly sought advice on Reddit, was outed as purposely deleting 33k of Hillary’s e-mails with Bleachbit, in what Comey dubbed the “oh shit” moment, to ensure they would not be recoverable. James Comey confirmed in his testimony before Congress that Paul Combetta was the Reddit user “StoneTear.” These details were not covered in the interview last night but were in the news headlines during the election cycle.

During September and October of 2016, the FBI investigation notes relating to the Clinton investigation were released during Friday news dumps. Within the notes, we learned that the IT firm, Platte River Network, which employed Paul Combetta and managed Clinton’s e-mail server, referred internally to her document retention policy as the “Hillary Cover-up Operation.”

We also learned that her e-mails were being reviewed by what interviewees called a “shadow government” to recommend changes to the classification levels. IPS officials felt pressured to declassify e-mails. E-mails were first reviewed by 7th floor leading State officials (also referred to as “Shadow Government”).

Reopening the FBI investigation less than two weeks before the election

After suppressing the FBI investigation, Comey was forced to reopen the investigation due to new evidence that had emerged. This is one of the many events Clinton cites as excuses for her loss. After claiming to have reviewed several thousand e-mails in an incredibly short span of time, a week later, Comey claimed the new e-mails did not change his initial opinion that the case should not be prosecuted.

Stephanopoulos: Did you tell him that the Steele dossier was paid for by the Democrats?
Comey: No, we didn’t call it the Steele Dossier then.

On January 10, 2017, Buzzfeed published a salacious dossier with largely unfounded claims that Trump and his associates were colluding with Russia and that Russia had damaging information that would be used to blackmail Trump. It included accusations of a Trump associate who met with Kremlin officials in Russia who was able to immediately prove that he was in America during the stated time of the meeting. Not only was the memo filled with inaccuracies and fantastical claims, it received immediate criticism for using paid Russian sources to collect the information.

The memo was compiled as opposition research provided by British M16 intelligence official, Christopher Steele, and commissioned by Fusion GPS. Initially, it was funded by Republicans during the primary and then attorney Marc Elias took over the funding on behalf of the Clinton campaign and the DNC during the general election. When the research funding changed hands, the research was directed to Russian connections. Steele was hired for that effort. We also later learned that Comey briefed Trump about the dossier in private.

Fusion GPS is a strategic intelligence and research company founded by former journalists from the Wall Street Journal, Glenn R. Simpson and Peter Fritsch. Among its body of work, Fusion GPS has worked with pro-Russian lobbyist, Rinat Akhmetshin, and Russian government lawyer, Natalia Veselnitskaya, to lobby against the Magnitsky Act, which is a key issue for Vladimar Putin. National Security Adviser Michael Flynn spoke with Russian Ambassador Sergey Kislyak once President Obama issued Russian sanctions. This may have been a violation of the Logan Act. Flynn allegedly didn’t disclose this conversation to Vice President Mike Pence, who was head of the transition team. As a result, he was forced to resign on February 13, 2017.

Additionally, Flynn didn’t disclose his lobbying activity for Turkey, even when legislation favorable to Turkey was passed. Comey later testified before Congress that Flynn is under FBI investigation and that the investigation is separate, but touching the FBI’s Russian Election Interference investigation.

In addition, because of the building allegations, Attorney General Jeff Sessions, whose confirmation was hotly contested in the Senate, was forced to recuse himself from any investigations into collusion between the Trump campaign and Russia.

Termination of the FBI Director

There were at least two times in 2016 when the hashtag #FireComey was trending in social media. First, by those upset with his decision not to recommend prosecution of Hillary Clinton. Second, by those upset that he reopened the investigation into her mishandling of classified documents.

On May 3, 2017, Comey testified before Congress regarding the Russian investigation as well as his conduct during the investigation into Hillary Clinton’s illegal private e-mail server. He claimed that he had no choice but to reopen the case because thousands of new classified e-mails were found on Anthony Weiner’s laptop. On May 9, 2017, FBI sources leaked that they were in damage control mode because Comey had lied to Congress. There were only a few classified e-mails on the laptop.

Later that day, he was fired by Trump. Included in the decision to fire Comey was Attorney General Jeff Sessions and Deputy AG Rod Rosenstein. Comey was in Los Angeles at an FBI event and learned of his dismissal from a television in the room. Almost immediately, the public, who just that morning were outraged by his incompetence, were now celebrating him as a symbol of the resistance. The Watergate comparisons couldn’t come fast enough.

It could’ve ended there, but Trump included a very odd sentence in the middle of Comey’s termination letter.

Even worse, Trump did a one-on-one interview with CNN’s Lester Holt in which he claimed that he fired Comey because of the Russian investigation. Then Comey started leaking details of his conversations with Trump to the press. He claimed Trump demanded his loyalty.

Not to be outdone, Trump made things much worse for himself by implying he had recorded the conversations. This resulted in at least four letters from Congress demanding copies of the recordings and an investigation into Comey’s firing. The White House has now denied the existence of any such tapes.

Comey testified in front of Congress that he had documented his conversations with Trump. He stated that Trump wanted him to drop the Flynn investigation and needed repeated assurances that he was not personally under investigation. Comey also revealed that Attorney General Loretta Lynch had asked him to call the Clinton investigation a “matter,” which he felt was an inappropriate request to use Clinton campaign language. He also admitted that leaking his memo to the press was an attempt to get a special prosecutor to investigate.

Of the memos written by Comey that have been turned over to Special Prosecutor Robert Mueller, it has now been determined that some contained classified information, which brings into question whether he broke any laws.

In the memos, Comey documented multiple occasions of being asked to affirm his loyalty to Trump. As a long-standing leader of the FBI and a veteran agent, Comey regrets that he did not once tell Trump that his requests were inappropriate.

At the end of the interview, Comey stated that Trump is not mentally incompetent, he is morally incompetent. He referred to Steve Bannon stating that the biggest political mistake in U.S. history was Comey’s termination. Arguable, the biggest mistake could have been Trump’s decision to run. Comey believes that Trump should not be impeached, but that we, the voters and citizens of the U.S., should take responsibility for voting Trump out of office. With such a declaration, his actions are bizarre. He appears to be on a tour to discredit Trump, but states that we should do nothing about it until 2020.

But to answer the larger question, and the title of this article, did Comey spoil the election? I believe the answer is no. On the contrary, he did everything within his power to contain a damaging investigation into Hillary Clinton and a damaging investigation in Trump’s campaign staffers. Can we really blame Comey for the actions of the two most scandalous presidential candidates in U.S. history? But furthermore, does Comey represent the FBI? Is he the poster boy for our intelligence agencies? Or is he simply a wishy, washy man who likes the microphone?

There was a time when a simple negative campaign by a well-funded, dark money PAC could bring a candidate down. It was so successful that it coined a new term in politics: “swiftboating.” Now, you can be under FBI investigation, have multiple, re-occuring headlines about your legal troubles, circulating to millions of voters and it won’t even make a dent. Because voters are polarized, apathetic, and unimpressed. And besides, we can just blame our losses on Russia.